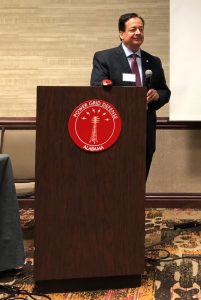 GES’s Roger Herdy, C.E.M., was a speaker at the recent Power Grid Defense Symposium held in Huntsville, Alabama. This symposium and conference was about the status and challenges of the electrical power grids that supply our nation. He was asked to speak about GES’s involvement in a group called Energy Huntsville (where he is Director of the Membership and Sponsorship committee), which was started by the Mayor of Huntsville to help bring business to town (GES’s Jay Newkirk is also the Executive Director for Energy Huntsville).

Roger was also asked to talk about some of the electrical power generation technology for “Supercritical Carbon Dioxide Brayton Cycle” where GES has been working with Sandia National Laboratories over the last several years, and its applicability to resilient power grids.